Use of ExAller® in Clinical Practice

The results of the clinical follow-up conducted in 2020 in 5 allergy centers in the Czech Republic confirm the conclusions of the prospective study conducted in 2014 in Belgium. Regular treatment of bedding with ExAller® leads to a reduction in the intensity of allergic symptoms in patients with mite allergy.

Mites are tiny arthropods that are mankind’s faithful companions. Their size is approximately 0.3 mm, making them invisible to the naked eye. Even if we don't know it, hundreds of thousands to millions of them live with us in our homes. They are very undemanding, and the various substances of biological origin that are part of the household dust, in particular scales of human skin, mold spores, food waste, etc., are completely sufficient to feed them. Naturally, the supply of food for mites is increased by the presence of pets whose feathers or fur, as well as skin detritus, sebum and sweat, saliva, urine and other secretions, greatly enrich the composition of house dust. The number of mites varies in different apartments, but also in different parts of the same apartment, depending on its furnishings and maintenance. They can be found in all dust reservoirs - carpets, cushions, stuffed toys, furniture upholstery, etc. However, the best conditions for them to live in are provided by our beds - mattresses and bedding, offering optimal temperature (22-26 °C) and humidity (above 55%) as well as the abundance of food constantly supplied in the scales of the peeled skin. It has been reported that there are between 100,000 and 10 million mites in a normally maintained 1.5 year old duvet. This means that up to 10% of the weight of such a blanket is made up of mites, their excrements and carcass remains.

The presence of mites in the household is completely harmless to a healthy person, but represents a major problem for allergic persons. It has been reported that 1-2% of the world’s population (i.e. 65-130 million people) are sensitized to mite allergens. Hypersensitivity to mites has been cited as one of the principal reasons for developing allergic diseases, specifically allergic rhinitis and asthma. Contact with mites also contributes to the development of allergic eczema. 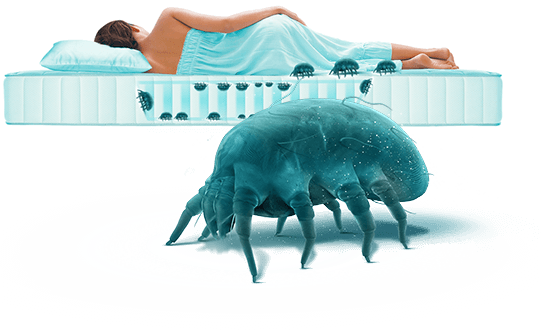 In terms of allergology, house dust mites (HDM) are of utmost significance, in particular Dermatophagiodes pteronyssinus and Dermatophagoides farinae. More than 90% of patients with a proven hypersensitivity to mites are simultaneously sensitized by their major allergens present in their bodies (Der p 2, Der f 2) and in their excrements (Der p1, Der f 1). The threshold for sensitizing pre-disposed individuals with mite allergens is 1-2 µg in one gram of dust, and the amount sufficient to cause an asthma attack is then 10 µg/gram of dust. (It is important to note that up to 50 µg of mites can be detected in one gram of bed dust in a typical household!).

The mite allergens induce a classic specific Th2 response with the involvement of T and B lymphocytes and the production of IgE antibodies and cytokines typical of type I allergic reaction.

The pronounced pro-inflammatory effect typical of mites is also due to the activation of components of the non-specific immune system and the biological activity of certain molecules which, as enzymes, contribute to the disruption of the barrier function of the skin and mucous membranes and facilitate the penetration of allergens.

The basic recommendation for a patient with proven allergy to any allergen and linking the subsequent problems to the exposure is, of course, to eliminate the causative allergen.

For the majority of allergically important allergens, their complete elimination from the environment is not feasible, either because of their massive seasonal occurrence in nature (pollens, mold spores) or because of their community distribution and indoor exposure (mites, pet allergens). In an allergic person’s domestic setting, it is always necessary to focus on reducing the amount of allergens below the dose capable of causing difficulties. As a result, the basic requirement for patients with mite hypersensitivity involves introducing a dust-free regime that will reduce the sources of food for mites and their increase. Concurrently with suppressing the multiplication of live mites, their inanimate residues, which remain the main source of allergens, must also be effectively eliminated.

The basic recommendation for a patient with proven allergy is, of course, to eliminate the causative allergen

To maintain a dust-free regime in the long term, it is important to have household furnishings with easy-to-wipe surfaces and no unnecessary dust traps. Also, the presence of any domestic animals, which are a source of a variety of biological materials (i.e. food for mites) and, moreover, always increase the risk of further allergenisation from the animals' own allergens, is not recommendable. Frequent regular cleaning, using a high-quality vacuum cleaner with HEPA filters, ventilation and maintaining optimal air temperature and humidity are essential.

Great attention should be paid to cleaning the bedroom and taking care of mattresses and bedding. As a rule, we choose washable materials for the filling of allergy blankets and pillows; that is, not feathers, which can not only be allergenic themselves, but also cannot be kept clean for long periods of time.

Frequent changing of bedding (at least once a week for allergic persons) should be combined by thorough mattress vacuuming and pillow and duvet airing. If possible, it is advisable to occasionally expose bedding to frosty air. Special anti-allergy covers can also be used to form an impenetrable barrier between the skin and airways of the allergic persons and the inside of mattresses and bedding, which are reservoirs of mite allergens. There are also all sorts of chemicals on offer (acaricida), which can even be added to textiles during their manufacture.

It should be taken into account that, despite all efforts, it is not possible to remove dust mites from bed and house dust completely, we can only reduce their quantity. Maintaining a “mite-free” environment for an allergic patient is always a long-term and challenging process, requiring the involvement and understanding of all household members. In practice, a combination of different methods is most effective: maintaining conditions unfavorable for mite breeding indoors and, in parallel, thoroughly removing both live mites and their residues by frequent vacuuming using an efficient vacuum cleaner.

A new method of elimination 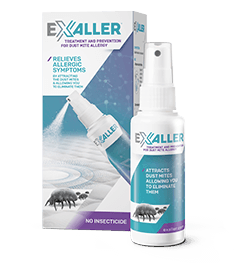 A new method of eliminating dust mite allergens from the bed appears to be very effective, the essence of which is the combination of the use of a 100% natural pheromone solution in the form of a spray (ExAller®) and an effective vacuum cleaner. After spraying the pheromone on the sheet, mites from the deeper layers of the mattress are attracted to its surface after a short period of time.

They are subsequently eliminated by washing the fabric in a regular laundry detergent - without using any special chemicals. It is important to complete the process by sucking out leftover mites with a HEPA-filtered vacuum cleaner. The benefit of this procedure is that mites are removed even from deeper layers of bedding than would be possible by vacuuming alone, and at the same time, that the patient’s skin and mucous membranes do not come into contact with any aggressive chemicals.

The benefit is that mites are removed even from deeper layers of bedding, and that the patient’s skin do not come into contact with any aggressive chemicals

It has been shown that after the first use the bed mite allergen load is reduced by 80%, by 94% with the second use and by up to 97% with the third use. Of course, the whole procedure needs to be repeated (according to the instructions at progressively longer intervals) because with daily use new mite colonization and multiplication occurs.

The effect of the pheromone (previously under the name Acar’Up®) was demonstrated in a prospective pilot study conducted in Belgium which included a total of 40 children with mite allergy demonstrated by radioallergosorbent test (RAST) and skin tests. All children experienced symptoms of moderate to severe allergic rhino-conjunctivitis. The assessment of symptom intensity was conducted before the start of the monitoring (D0) and then 1 week after the first application (D7) and then 1 week after the second application (D14). All patients completed the study. Side effects were not observed in any of them. Significant reductions in symptom intensity were demonstrated for nasal congestion, sneezing, nasal itching and ocular itching. There was also a reduction in nasal secretion, but with no statistical significance. The percentage of patients reporting moderate or severe symptoms at baseline and no or only mild symptoms after the second cycle were 70% for nasal congestion, 47% for sneezing, 62% for nose pruritus, 60% for eye pruritus and 62% for nasal secretion.

Clinical monitoring in the Czech environment

A clinical follow-up with a similar design was conducted at five allergology centers in the Czech Republic between May and December 2020. A total of 45 patients aged 5 to 57 years (24 males, 21 females, of whom 19 were younger than 18 years) with a proven allergy to mites were included in the monitoring. 28 patients had allergic rhinitis or rhinosinusitis, 1 of them also had proven nasal polyps, 17 were treated for bronchial asthma and 3 for eczema.

During the monitoring period, the patients continued to receive established anti-asthmatic and anti-allergic treatments (predominantly systemic and topical antihistamines, intranasal or inhaled corticosteroids and bronchodilators). In addition, their mattresses were treated three times with ExAller®. Symptom assessment and PEF measurement were performed at baseline (at the initial visit) and after each application of ExAller®.

Based on the analysis of the data from the forms, 5 allergic symptoms were identified as the most common: nasal congestion, sneezing, nasal secretion, itching and watery eyes. All of these symptoms showed a significant reduction in severity during the use of ExAller® (values at baseline and after the third ExAller® application were compared using a two-sample paired T-test for the mean; p<0.001). The mean PEF increased by 10% after the third pheromone treatment compared to the mean measured at baseline (p<0.001). Improvements were also seen in other (less intense or less frequent) allergic manifestations: cough, shortness of breath, wheezing, scratchy throat, rash and erythema.

The majority of patients who reported severe/moderate allergy symptoms at the initial examination rated them as milder or completely symptom-free after the 3rd application. No side effects associated with the use of ExAller® were observed during the monitoring.

Clinical observations abroad and in the Czech Republic show that regular treatment of bedding with ExAller® leads to a reduction in the intensity of allergic symptoms in patients with mite allergy. The product is a suitable and safe addition to anti-allergy treatment and can be recommended for the maintenance of bedding (possibly other potential reservoirs of mites) in an allergic patient’s home.

Allergist working in the Pilsen - city. Dr. Ester Seberová graduated from the Faculty of Medicine of Charles University in Pilsen and completed her studies in 1978. She has a certificate in the field of medical immunology. She performs her medical practice in the field of allergology under the registered name RESPIRAL s.r.o.

COVID-19: Treat your allergy to help control the pandemic

In addition to the dreaded COVID-19 virus, there are plenty of words floating around that many of us are weary of hearing: “pandemic”, “mask”, ...

END_OF_DOCUMENT_TOKEN_TO_BE_REPLACED

Stuffy, runny nose? Irritated, itchy eyes? Wheezing or asthma? These symptoms may be caused by an exaggerated immune response to dust mite allergens. ...

END_OF_DOCUMENT_TOKEN_TO_BE_REPLACED

ExAller® is a clinically tested product recommended by world-leading allergists that extracts and eliminates 99% of allergenic dust mites living in carpet, furniture and mattresses. Experience allergy relief after just one use.